Standing in the heart of Metfield village is the sturdy medieval St John the Baptist Church. At one time run by the Cluniac monks from nearby Mendham Priory, a chaplain from the priory served in this parish until 1521. Although the church is not mentioned in the Doomsday Book (1086), it may well have been included under the heading for the mother church Mendham Priory (founded in 1155 by William de Huntingfield).

The origins of the church are thought to be 12th century. A method of work used at this time was called long-and-short external stonework, where long thin blocks were alternated with wide thin blocks. The church is mainly 15th century, Perpendicular in style, with some 14th-century remains. The early church beginnings were built on a much smaller scale and would have been dark, cold and damp.

Before clocks were invented, a Mass Dial – an early device of a simple sun dial – was used by priests in ancient times to tell the time of services. The circle or small hole can be found to the left of the priest’s door on the south wall. By placing a twig in the circle, the time could be assessed according to where the shadow was cast.

The craftsmanship in this lovely building is impressive, see especially the fine flush flint façade on the front of the porch. Inside the porch are the Master stone mason’s marks, discovered during the recent renovations. Suspicion was rife in bygone years and it was thought these marks would keep out the witches and the Devil.

On the Liernere vaulted ceiling of the porch are carved wooden bosses, Christ in Majesty, a woodwose (a wild man of the woods) – typically found in churches across East Anglia – and a Green Man. The room above the porch is the ‘parvis’ – a small room once used by the priest or as a school room.

A bequest from the Jermy manorial family of 100 shillings enabled the church tower to be completed in 1305, and another gift paid for the 15th-century font. The font is in typical East Anglian style, with an octagonal bowl carved with alternating figures of lions and demi-angels bearing shields. The shields depict the coat of arms of the Jermy family. The font stem is supported on more figures of lions.

Ichthus – the fish – a symbol for Christ which has been in use since the days of the early church. In Greek, it is an acronym for Jesus Christ, the Son of God, our Saviour.

St John the Baptist Church has many treasures, including the rare 17th-century turret clock (1629) which is still operational. 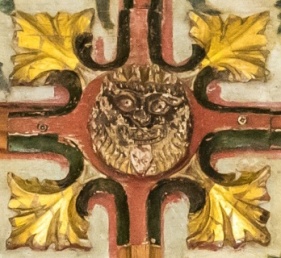 A rood screen once filled and separated the nave and chancel but all that remains are a few surviving panels with traces of the original paint.

As with many churches in the area, St John the Baptish suffered at the hands of Laxfield-born William Dowsing, a Puritan iconoclast, when he visited Metfield on 30 August 1644 and destroyed and defaced religious artefacts. Fortunately, though, the rare 15th-century cellure or canopy of honour (considered the finest surviving medieval canopy of honour in East Anglia) escaped his attention. Although the 16-panel cellure has faded with time, it is still quite beautiful. In the centre of four of the panels is the ‘Metfield imp’ – a grotesque man with ragged hair and beard – with tongue outstretched, a naughty demon. It was believed that the imp would look down on the priest and congregation and collect idle gossip and jokes.

The two marble memorials on the nave wall have inscribed on them the names of the men from this parish who were killed fighting for freedom in the two world wars. 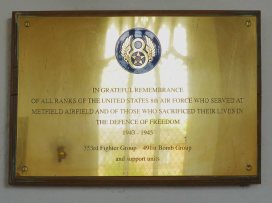 On 19 May 1992, at a commemorative service, a memorial plaque was unveiled on the south nave wall. Dedicated to the USAAF airmen and service personnel who were stationed at Metfield airfield during the Second World War.

In 2016, along with extensive restoration and renovation, a concealed kitchen was added and the back four sets of pews were removed to allow extra space for fellowship after services. Watch this short film made by former resident Jonathan Brinton about the church restoration project.

The churchyard is managed by Suffolk Wildlife Trust.

St John the Baptist Church is open daily and welcomes anyone who would like to enjoy and explore this lovely building. The visitors’ books are full of delightful comments written by people from all over the world who have been to look around the church.

Links to LOCAL BUSINESS AND SERVICES

How to find Metfield